This is a guest post (the first on this blog!) by a friend of mine, Ryan Hagglund. He has an extremely promising variation on the usual study abroad trip that I thought you would find interesting. Enjoy and let us know what you think in the comments. 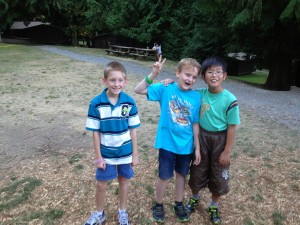 After many years of thinking about it, we finally took students from our school (MY English School in Yamagata) to the US for the first time this summer.  Thanks to all the advice and stories I read and heard from others, the trip was overall a success and will hopefully serve as a building block for many more to come.

My impression is that most international trips English schools organize involve some form of formal study.  While there is obviously nothing wrong with studying—we ARE a language school—it seems like there’s plenty of time for the students to study while in Japan.  The main purpose for us in going was to give the students something they couldn’t receive here: the opportunity to interact with large numbers of English-speaking children of their own age.  We wanted to give them an experience that would lead to greater motivation and increased interaction skills, among other things.  The instrument we chose to accomplish this was to have the children attend a summer camp intended for children who are native speakers of English, not English learners.

We chose Warm Beach Camp in Stanwood, Washington.  We chose Warm Beach for several reasons.  First, it is the camp I attended when an elementary and JHS student, so I was familiar with the facilities.  Having attended almost 30 years ago, however, I no longer had connections to any of the staff.  Second, it is a large facility that not only has many activities for campers to do, but was also able to house our staff away from our students but still onsite.  Third, it gave considerable value for the price.  Camp was only US $399 per student for six days and five nights—including meals—and they supplied free room and board for our staff in a separate onsite facility.  They also provided free sleeping bags and pillows to our students.  (Warm Beach is a Christian camp facility, but we were careful to make sure our students and their parents were aware of this.  There are most likely secular camps with similar facilities and value.) 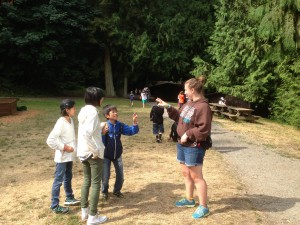 We took five students—two boys and three girls—ages 9-13 (Japanese elementary 4th grade to JHS 2nd year).  There were approximately 80 campers all together ages 9-11 (US 4th to 6th grade) divided into cabins of six or seven students each. Our 13-year-old student had no problems relating to the younger campers, though JHS 1st year would probably be a good cutoff.  Since none of the US campers nor counselors spoke Japanese, the students had to navigate in English.  What was nice, however, were the many activities the children were able to participate in, allowing them to interact in English without consciously having to overly focus on the language itself.  Some of the activities they participated in were: field games, swimming, archery, horseback riding, canoeing, wall climbing, BB-gun shooting, mini-golf, and a bonfire.  While it was challenging for them at first, by the end of the trip four of the five students said they would like to stay longer.  The fifth (12 years old) said she was glad to have come, but just ready to go home.  We were only with the students for a daily meeting each evening, when pre-activity safety instructions in Japanese were necessary, and when a student became homesick and needed a little extra support.  We had a pre-paid US cell phone so the camp and/or counselors could reach us at any time if necessary.  They only called us once.

While the camp was our focus, we did do other activities as well.  Our schedule was as follows:

We will probably add an additional day of Seattle sightseeing if we go again next year.

1)     No need to be concerned about the quality of homestay families.
2)     No need to worry about logistics for most of the trip.  While at the camp, we were able to focus entirely on the students’ linguistic and emotional needs, while enjoying ourselves for most of the time.  The camp took care of the rest.
3)     No need to think of specific language activities, as the situation itself required meaningful English interaction from our students.
4)     The camp wanted the trip to be successful as much as we did.
5)     No need to pay a third party for special arrangements.
6)     Students needed very little spending money.  Each student brought 20,000 yen in spending money, but none of them came close to using it all.
7)     Since almost everything was included in the camp price, there were fewer opportunities for financial surprises.
8)     24-hour onsite certified nurse, removing the need for us to worry about student sickness and/or injury.

1)     We did have to plan the logistics outside of camp time.  This included airline booking, three nights of hotel, sightseeing in Seattle, and transportation to and from the camp.  While not difficult, might be hard to leave to a school teacher or staff member not familiar with the Seattle area.
2)     Not as appropriate for students who would prefer a “travel experience” versus an “immersion experience”.

All in all, it was a very successful trip—especially for a first time.  We are already working to produce marketing materials for a similar trip next year.

Ryan Hagglund is President and CEO of MY English School in Yamagata Prefecture.  He has lived in Japan for 15 years and originally hails from the Pacific Northwest.  He is married to Maki Hagglund and has three children: Aiden (8), Ian (6), and Sean (4).

2 replies on “Taking students to summer camp in the US”

Thanks for this Ryan, sounds like a great experience for ALL involved. What a shame the kids couldn’t see a baseball team playing above .500 :-P.
Is your trip next year likely to be open to other English school students?

The kids at least got to see two Japanese players on the field, but the 10-0 shellacking was a bit of a disappointment.

While we don’t necessarily plan to promote the trip to outside schools, we would definitely be open to bringing others along. We’ve sent students on trips with other schools in the past, so accepting students from other schools seems natural. Do you have any students who might be interested?