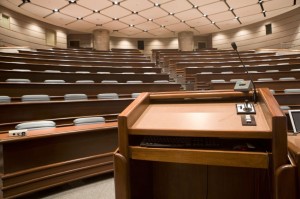 I have a new policy regarding English speech competitions (actually it’s an old policy, from earlier in the year) and I just wanted to make it public here along with the thinking behind it.

On many occasions in the past I have helped out with English speech contests and similar competitive events, as a coach, a judge, and even an organizer (the Miyagi Skit Koshien). However, I have never been completely comfortable with them, and recently have even begun to find them harmful.

I don’t believe competitive events are helpful to most language students. Yes, they can encourage students to spend a lot of time practicing, but the practice as it stands is not particularly useful (memorizing and repeating a speech ad nauseam). The winner-take-all nature of most contests is positive for the student that wins, and mostly negative for all the other students.

The sheer arbitrary nature of the judging decisions can make this worse (I have been on judging panels where students were disqualified because their school won the previous year, because it would be bad to give prizes to two students from the same school, or because one of the judges didn’t like the subject matter of their speech).

Add to this the strong suspicion I have that almost none of the students are writing their own speeches (and even if they do, they have no chance of winning), the disappointing contrast between the students when they are on stage giving their polished performance and after the event when they can’t seem to string two words together in English, and the slightly racist policies that bar students with non-Japanese family members (even non-English speaking ones!) from taking part and the whole circus just starts sitting wrong with me.

Finally, I don’t actually enjoy judging speeches and recitations. Some of the speeches can be interesting, but the pressure to rank the competitors and think of something intelligent to say in the final remarks takes away a lot of the pleasure.

Due to all of this, and because I haven’t found that taking part improves my life in any way, I will no longer be accepting invitations to be involved with competitive English events of any type.

However, I would like to see non-competitive events, like performance evenings or talent shows, become more widespread.

What do you think? Am I being too hasty in dismissing English contests?

I have the same viewpoint, Ben. Whilst I have limited experience with speech contests (went to a JHS one as an ALT, helped with a few students’ pronunciation and delivery), I recognise all your complaints.

I know it’s subjective but one boy who I felt was one of the poorer speakers came 3rd much to my surprise. Possibly because of the speech content even though, as you say, I don’t think hardly any of the students write them. They may come up with a topic and write a speech in Japanese which is then translated by a teacher.

It’s more of a memory test really. Pronunciation and delivery is important but if a student looks down at their speech a few times they lose marks! Why should memorization matter? If they wrote notes and delivered a great speech that would be much better.

I agree. I’d love to see something like TED, where students are chosen based on their content and delivery, and participating is its own reward.

I saw a good workshop by a high school teacher from Sapporo the other day on running an internal school “contest” but it was more about getting students to give a presentation rather than a speech. All students from his school could enter, so it wasn’t restricted to a select few. Students had to give a business pitch, not a long morality speech and also had to take questions. Some of his students were there and gave their presentation and it was really good. They even took a question from the audience. A much more useful skill than recitation.

Now that is an event I would be interested in! Sounds great.

As you say, building skills that might come in handy later too.

While I see and understand many of your qualms, I’ve also seen the positive impact speech contests have had on many of my students. Even student I’ve coached has come out with a sense of accomplishment and greater confidence, many going on to extremely well in English in high school and university. If you look at just the one day, I can understand the cynicism. I think a lot of good comes out of the process and experience, however. That’s not to say there couldn’t be improvements. Some of the judging subjectivity has been dealt with fairly well up here in northern Yamagata. I just feel you might be throwing the baby out with the bathwater.

Glad to hear you have had some good experiences.

Do you really think they need to be competitive though? Could we not have some kind of celebration of ability without trying to rank people?

When I was in school, there would always be this one kid every year in the annual elocution competition, who would belt out that overdone bit about ‘I Have a Dream’. No offense meant to Martin Luther King or his rather soul-stirring speech, but I have to admit that it used to get a bit too irritating hearing the same thing over and over. And I used to think back then, why don’t people come up with some original topics, and not the done-and-dusted ones about coming to bury Caesar and not to praise him? So I had a dream myself to come up and suggest persuasive speech topics for middle school students. I can understand that perhaps at that age, they may not have the maturity to come up with topics of their own. So they can read on here, to get some really original speech topics that are not only interesting, but quite contemporary, too. And, if you write something on your own, rather than just blurting out another person’s speech, even the judges might find it quite impressive.

Hi Rosalind
I like your idea! I would rather see students presenting interesting topics for the sake of it instead of competing by having their teachers write their (boring, too earnest) speeches for them 😉