Some corner of a foreign field… 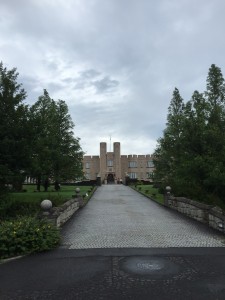 I finally had the chance to visit British Hills in Fukushima last weekend. If you are not aware of British Hills, it’s basically an ‘English village’ run by the Kanda Foreign Languages Group that doubles as a hotel and language training centre. They are located in the mountains of Fukushima, 25 minutes drive from the nearest convenience store!

The resort was running a special summer tour for teachers (basically a PR exercise) and I was able to join it alongside 28 other teachers. We spent about 24 hours there, arriving on Friday morning and leaving on Saturday morning. It was extremely interesting and worth doing if you are thinking about taking students there. The study visit costs about 12,000 yen, which basically covers the food and transport costs. Accommodation and lessons would be much more if you were paying (more on prices later). 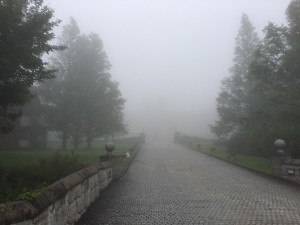 Weirdly, we had British weather the whole time: misty and cool. The resort is in the mountains at 1000 metres altitude, so it’s much cooler than the surrounding area in summer. Apparently they get up to 2 metres of snow in the winter though!

The schedule for the visit 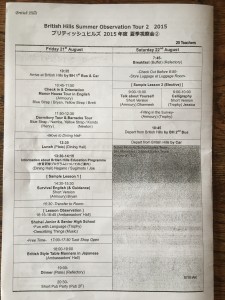 The event was extremely well run, and we had a number of the sales and management staff (including the President) come up from Tokyo to join in. To be honest, it was an extremely full schedule, and we felt a bit rushed. There was no time to walk around or relax on the tour.

The buildings and grounds at British Hills are probably the best thing about the place. The whole complex is beautiful and is very ‘English’ in a stereotypical way. Lots of lawns and Edwardian houses. It definitely fulfills its role as ‘an English village in Japan’. 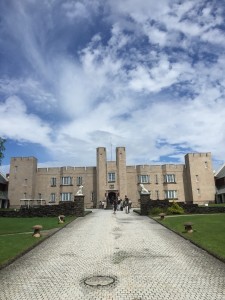 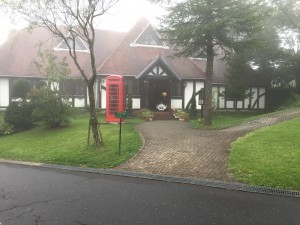 The tea shop, which we didn’t have time to sit down in but looked good. 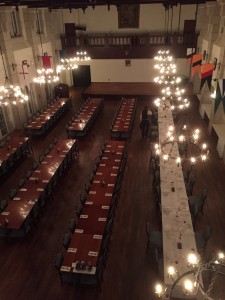 The dining hall, modeled on an Oxbridge college Hall. 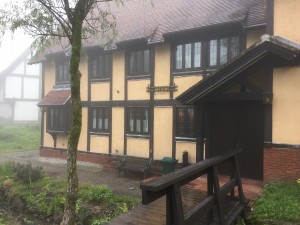 One of the student dorm buildings. 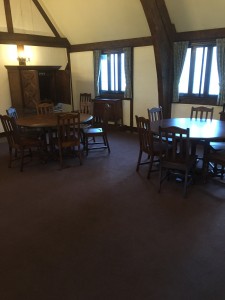 A common room in one of the student dorms. 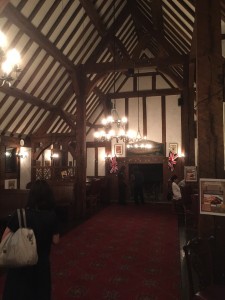 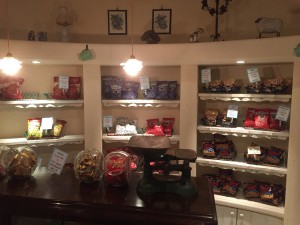 The tuck shop, which I was initially excited about, and then very disappointed with. None of the snacks are British!

During the tour we were able to attend or watch the following lessons:

My impression of what we saw is that the Japanese orientations (PR pitches) were pretty good, the content lessons in English and Japanese were very good, and the language lessons in English were pretty poor. The lessons I saw (which I presume are the best lessons) struck me as something a first-year ALT might do. Lots of running but most students are not doing anything for most of the time. I was expecting much more and this was the most disappointing aspect of the visit, particularly as students pay 3000 each for these lessons, so with a full class of 20 you are paying 60,000 yen to have students do criss-cross for 90 minutes.

The calligraphy lesson we took was very good, as was the lecture on table manners. I imagine the cooking lessons would also be fun.

Based on what I saw, the language lessons are not worth doing, but the culture and craft ones might be.

We had three meals on site. 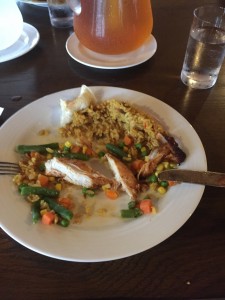 Lunch was fine. It was filling, hearty, inoffensive, and kind of British. 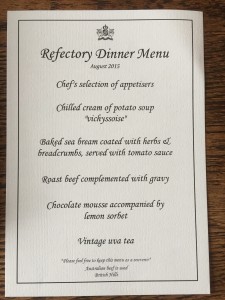 Breakfast was fine, buffet-style like a hotel. Not great quality but filling.

The staff were without exception all great. Friendly and welcoming, there was a really nice atmosphere throughout the site. 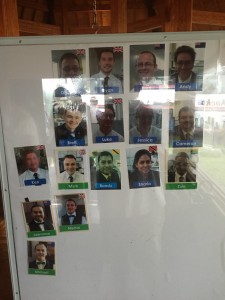 Some of the teaching staff.

Apparently there are twenty-three foreign teaching staff, and twenty other foreign staff on site. As the resort is open all year round, they presumably are working shifts and taking holidays. My impression is that there were not as many foreign staff as I was expecting. To be honest, they were kind of thin on the ground. British Hills, at least while I was there, did not deliver the kind of English immersion I was expecting.

The resort did have Japanese staff that were doing their best to interact with visitors in English, but the few interactions I witnessed seemed a bit forced and the resort staff’s English was not perfect, even when dealing with junior high school students. Of course, this would not be important outside of the context of an English immersion experience.

Overall though, the friendliness and warm atmosphere was a credit to the resort.

Now this is the killer. The resort is located about 40 minutes drive from Shin-Shirakawa shinkansen station. The resort operates shuttles, but I’m not sure if you have to pay for them. From Sendai, it’s basically two hours door-to-door by shinkansen, or three and a half by coach.

The prices, both to stay and for lessons, seem a bit high to me. The resort has a high season (July to September) and a low season (the rest of the year). Prices are slightly lower in the low season. There are also different prices for schools, universities, individuals, and groups. It’s all very confusing.

My impression is that it will cost 15,000+ yen to stay and 3000-5000 yen per class per student. They seem to be empty in the winter, so it may be possible to negotiate a better deal then.

I was both impressed and unimpressed with British Hills. The facilities are amazing, the staff are really friendly, it’s inconvenient to get to, the prices are a bit too high for accommodation and ridiculous for lessons, and the language lesson quality is poor.

Overall I would not write it off, but you would have to be very careful when designing your program to make it worthwhile. I get the feeling their standard packages would be a poor value.

It was an interesting couple of days though. Thank you British Hills for the invitation and the hospitality, and hopefully I’ll have a chance to take some students there at some point.

Has anyone else visited British Hills? How was it?

10 replies on “British Hills in Fukushima”

Pleased to hear you had some British weather during your visit!!
I heard about this place a bit during my ALT days in Saitama so I was really interested to read your post.

I’m really curious to know what it would be like to work there as a teacher from overseas? Do these people stay on site or do they live else where?

Some of the teachers live onsite, and some commute from nearby towns/cities (mainly Koriyama). I think they have both short-term (working holiday) and long-term teachers.

Hello, I lived and worked at British Hills for 2 years. The lessons are designed to be everything for everyone. For Jnr students who have not learnt much English to those who have great English as Senior students. Depending on the students you can tailor the subjects you chose for your trip.
You are correct in assuming that their are both long and short term staff working there. British hills offers accomodation to all their teachers but some choose to live off the mountain as it can be a little claustrophobic after the first year.
Glad to hear you enjoyed it. I miss working there. It’s a great place.

Curiosity led me to see whether the old place was still alive and kicking. I was privileged to be on the gaijin staff who opened the village in 1994; I
was recruited in London to be the “Headmaster”/Butler-Administrator/ Teacher of Table-manners/ Toastmaster/Master of Ceremonies, etc;,etc. It was devilish hard work but huge fun creating the English boarding-school atmosphere and when my 3-year contract came to an end I was devastated to be leaving; I continued in my new-found career as a much more traditional kind of butler and my memoires are now available in two volumes:
‘The Butler Did It – Westbury Meets East’ and ‘Westbury Heads South’ I’m now retired and living in France. The British Hills experience (re-named in my books but recognisable from the photos) was really the highlight of my career with concerts, amateur theatre productions, dinner-dances, golf-tournaments and winter sports on tap.. I can’t imagine those days ever being matched…but you can read about them!
All proceeds from the books go to Handicap International.
Peter Westbury (nom de plume) I used “Stanbury” at the time.

Recommend you publish a Kindle version!

Peter, would you remember Hjalmar and Yvonne?

I just found this. Wow. Thank you Hitomi.